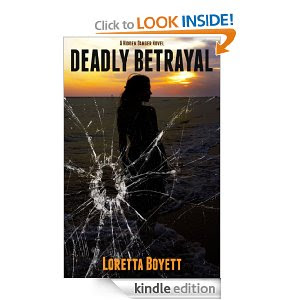 Paralegal Beth Thompson grew up in Ocala, Florida, the
only child of doting parents. Although her childhood was
a sheltered one, the terrifying nightmare that has dogged
her for as long as she can remember continues to haunt her.
Joseph P. Hill, an unscrupulous Sarasota Attorney, doesn’t
care how he makes a buck as long as he makes lots of them.
When he unearths a missing link to Beth’s past, Joe concocts
the perfect scheme to make this discovery pay off and lures
an unsuspecting Beth to Ft. Lauderdale Beach. Angry that
her boss, Attorney Alan Knight, does not return her feelings,
she takes the bait.
The night Beth arrives, a man is murdered at the airport.
What is her connection to him, and why did he die holding
a locket identical to the one she wore—and lost— on her
flight?
As the truth unfolds, each step draws Beth closer to a dark
secret hidden from her since childhood, plunging her deeper
into danger, deceit, and deadly betrayal.

1. How long have you been writing?
I’ve been writing non-fiction since high school (more years ago than I care to say), but I began writing fiction full-time in 2010 after retiring from a 32-year high school teaching career as an administrator and computer science/mathematics teacher.

2. What was the biggest obstacle you faced while pursuing publication?
Writing the proposal seemed almost harder than writing the book. (I totally agree with that!)

3. How did you get the idea for Deadly Betrayal?
The idea came to me several years ago when some new advances in forensic technology emerged.

4. Do you have advice for the writer still working to be published?
Attend writers’ conferences, join a critique group, and keep writing, learning, and submitting.
Great advice. Thank you!

5. When you sit down to write, what is always nearby?
I usually write on a laptop roll cart beside my kitchen table where I always have either a glass of water or a Lemon La Croix (lemon-flavored sparkling water). My notepads containing notes on my characters, plot, etc. stay on a pull-out shelf next to my computer.

Loretta Boyett is a Christian wife, mother, grandmother, retired educator, author, and member of American Christian Fiction Writers. She lives with her husband in northeast Florida. Although she has written non-fiction most of her life, she began writing fiction full-time in 2011 after retiring from a 32-year high school teaching career as an administrator and computer science/mathematics teacher. Her debut novel, Deadly Betrayal, an inspirational suspense-thriller, is the first in her Hidden Danger Trilogy and is currently available in both eBook and Paperback format on Amazon.com at http://www.amazon.com/-/e/B00AQYULUE. Also available is an ePoem Prequel to Deadly Betrayal: The Killer’s Heart. Loretta loves spending time with her family—three grown sons, their wives, grandchildren, and great-grandchildren. She and her husband also enjoy travelling and have visited almost all states in the U. S., from Toronto to Quebec in Canada, and most of Europe. Summers include a few weeks with her children and grandchildren at Florida beaches on Marco Island and Ft. Myers Beach, as well as getting together with her many other relatives at their annual family reunion in the Carolinas when possible.
Learn more about Loretta on Facebook, Twitter (@lorettaboyett), Linkedin, Pinterest, Goodreads, and www.lorettaboyett.blogspot.com/.

Do you have any questions for Loretta? What do you need nearby when you're writing?

Unknown said…
Congrats on your new book, Loretta! I admire your courage in self-publishing it. Thanks for the glimpse into the process, too! Wishing you all the best...

Janet said…
I had an aunt who used to live in Ocala. We visited once and was fascinated with all the statues of different horses throughout the town. I also write in my kitchen. This sounds like a good mystery, I wish her luck. I love the cover.
March 4, 2013 at 9:36 AM

Sandra Orchard said…
Great interview. One thing I've noticed about self-pubbed books is that the cover art doesn't always grab me. But I love your cover art, too. Great job.
March 4, 2013 at 9:52 AM

Author Jessica Nelson said…
Janet, yes, those horse statues were a project some kids did (high school or college, I think???). I remember when they put them up. Ocala and marion county is really a beautiful area. :-) (I'm biased a little since I live here, lol)

Susanne Dietze said…
Congratulations, Loretta! Thanks for introducing us to her, Jessica. Nice interview and info on self-publishing.

Jeanette Levellie said…
Congratulations, Loretta, on this excellent-looking book! I love this genre, and admire anyone who can write it!

Nancy said…
Loretta has certainly accomplished a lot in her life so far. And she even has time for vacations. Amazing.

I agree with you about the proposal. One of my friends jokes we should get a trip around the world and a mink coat for completing one.