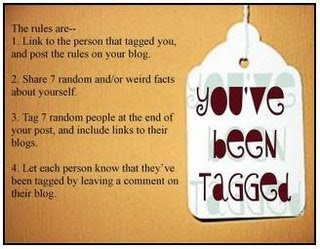 1. I've read very few classics, but the ones I enjoyed the most were Dracula by Bram Stoker and Uncle Tom's Cabin by Harriet Beecher Stowe. (but I didn't like the ending)

4. In high school, I had few friends. Probably because I carried a book with me everywhere and often hid it in my lap while the teacher was talking. Amazingly, I still managed to have a high GPA. Go figure.

5. I'm an accomplished walking-while-reading type of person and have been known to read while driving. Don't freak out though. Now that I have kids, I no longer indulge in this dangerous activity. LOL

6. If things had gone differently, I'd love to be an editor or agent because I like to read more than I like to write.

7. I'm all about the alpha male. My sister hated the alpha in my first manuscript and fell inlove with a beta male I'd never even considered as a possible hero. Yikes! Bring on the Alpha, and ONLY the alpha. *snort* (yes, I picked up the horrible snorting habit from Anita. Goes to show, bad company corrupts good character.) *double snort* Or should I snicker? Hahaha

So, who do I tag? How about everyone on my sidebar? I'm pressed for time so if you all don't mind, just glance to the right, scroll down a little, and you'll see a list of people's names. They all have wonderful blogs so I hope they'll join in the fun.

Okay, except the agents. They're exempt. And the Seekers, 'cause that's a group. The rest of you, I'll be stopping by. :-)
games

Kristen Painter said…
I swear, I just played this game. I'm not interesting enough to play it again so soon. lol

Sarah said…
Thanks for tagging me! But I'll have to wait and play later. I just posted an unusually long post on my blog.
November 14, 2008 at 5:05 PM

Karen Hossink said…
...because you like to read more that you like to write?
It's funny but I have never considered that preference before. And I'm torn - I honestly cannot decide which I like more. Maybe I need to sleep on it and consider the thought again tomorrow. *grin*
November 14, 2008 at 8:33 PM

Anonymous said…
Thanks for tagging me, Jessie! I'll play next week. :-)

Oh, and as to the snorting thing, sorry to corrupt you. Heh.

Your seven bookish things are great! Um, one question though, in referrence to the "Bring on the alpha and ONLY the alpha" ... does that mean you don't like Julian?

Author Jessica Nelson said…
Hey Terri,
No, I tried that but then I'd get things confused and stuff. :-)

Hey everyone else, sorry, I was gone all day today and am fixing to crash.