A Heart Revealed By Julie Lessman 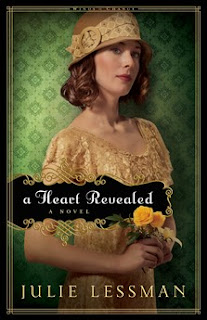 The ring on her hand belongs to one man …

but her heart belongs to another.

As a battered woman, Emma Malloy fled Dublin for Boston ten years ago, seeking shelter for a heart badly bruised by both her husband and guilt. But when she falls in love with Sean O’Connor, a man who wrestles with demons of his own, fear and shame almost destroy her … until she is finally set free by a heart revealed.


If you want love stories that curl your toes, then you'll adore Julie Lessman's books.

I dove into this book because I'd really been waiting to read Emma's story. Scarred by an abusive husband, Emma deals with deep self-worth issues. But she's also a beautiful person who tries to let her weaknesses and fears bring her closer to God.

If you're just looking for a straight romance, Julie's books are more than that. I saw her at the conference and told her I'd noticed how her books are moving into more of a saga-type read, rather than just a straightforward romance between hero and heroine.

With this shift in her stories (which really probably began in the third book of her first series, The Daughters of Boston), I've marveled at the strength of Julie's characterization. Especially with the females of the story.

I read this book on the way to and back from the conference. I both laughed and cried during it.

In my opinion, A Heart Revealed is one of her best books yet.

Have you ever read a saga? Have you read Julie's books? If so, which one is your favorite and why?

Leave a comment if you'd like to be entered to win A Hope Undaunted, the first in the Winds of Change series.
Blog Tour Books

I love keeping up with characters like this. I just downloaded one of her books, so I'm excited to jump in too!
September 28, 2011 at 7:27 AM

I've already read, "A Hope Undaunted." I must pick up this new one. When Julie first introduced Emma, I knew her story would someday be shared.

Jeanette Levellie said…
I have read only one of Julie's books, and adored it. She is a superb story-weaver.

I'd love to win Hope Undaunted. Please enter my name. Thank you!

Nancy said…
Yes, I, too, read the Twilight sagas and also Abram's Daughters by Beverly Lewis. I enjoy them if they aren't too lengthy. I think three books is enough for one story line.
September 28, 2011 at 9:02 AM

Sandra Orchard said…
I had the pleasure of hearing Julie read passages from her book in her ACFW class A Kiss is Not just a Kiss. :) I have A Hope Undaunted so don't include me in the contest.
September 28, 2011 at 9:40 AM

Jessica Nelson said…
Hi Susan! The second one is very good, although I'll warn you that Emma's story is only part of the book and not necessarily the main thing (though a big thing)

Jessica Nelson said…
Nancy, I do agree about lengthiness. Things can get tiring sometimes. Julie has done a great job with this series, though.

Diane said…
I have never read any of her books, but only see great reviews of her work.

Jeannie Campbell, LMFT said…
i LOVE julie's books! don't enter me for this, as i just read it. i fall in love with the o'connor's every time a new book comes out. can't wait for steven's story!

Eileen Astels Watson said…
I keep getting to told to read Julie's books. Their size is so daunting to me, though. I still have to get myself to read the first one that sits with dust on my headboard. One day...
September 28, 2011 at 4:10 PM

Mary Curry said…
Oh, great review, Jessica. I downloaded Julie's A Hope Undaunted last week. I haven't started it yet, though. So many great books I want to read but so little time!
September 28, 2011 at 5:34 PM

Robyn Campbell said…
I have not read her books, but I think I need to. And sagas are super fantastic. This book sounds awesome, Jess. I love a great romance. :-)
September 28, 2011 at 6:08 PM

Robyn Campbell said…
P.S. I need to like your author page. I have to dump some stuff first. Taylor Swift stuff Ivy put on my FB. I didn't know you had an author page. I needs one of them.
September 28, 2011 at 6:10 PM

Susanne Dietze said…
Great review! I have had my eye on this book, since I've read a few of Julie's and they're fabulous.

Jessica Nelson said…
It was Diane! Thank you. :-)

Jeannie, Steven should be interesting. I can't wait to see what she does. I'll admit that I kind of liked Maggie in the other books.

Jessica Nelson said…
Robyn, let me know if you get one and I'll like it. :-)

Texas Playwright Chick said…
Funny, someone recently mentioned this author to me. I guess I must read her, she's coming in highly recommended.
September 30, 2011 at 10:32 AM

Jessica Nelson said…
Which one is VG? What did you think Warren? Too much toe curling for a guy? *grin*

Hi TPC! Thanks for stopping by. I hope you enjoy her books if you pick one up. :-)

Julie Dao said…
Thanks for the book recommendation, Jessica! What a beautiful cover. I've been meaning to read more romance, so Julie Lessman will definitely be going on my to-read list.
October 2, 2011 at 4:04 PM

Melanie N. Brasher said…
I've heard so many good things about Julie's books. I need to read one!

I saw you briefly at conference, but I'm sad I wasn't able to connect. Ahh, it's a whirlwind, isn't it? :)

Julie Lessman said…
JESSICA, HOLY COW!!! Boy, you get some traffic here, girlfriend, and WHOA ... what a fabulous review!! Thank you SO much, my friend, not only for reading my books, but for taking the time to review it and host a giveaway -- you are a DOLL!!

I am SOOO glad you liked AHR because Emma's story was a departure for me since I typically like a lot of fireworks in a romance, like with Katie and Luke in A Hope Undaunted. Consequently, I wasn't sure everyone would care for the slower romantic pace of this story, but so far, so good!

I LOVED seeing you at ACFW and cannot WAIT to read Love on the Range next April. 1918 just happens to be a favorite time period of mine, you know ... ;)

Anyway, thank you again, Jessica, and I don't know if you are prone to posting your reviews anywhere else, but if you are, you might be interested in a newsletter contest I am running where anyone who posts a review on their blog, Amazon.com, CBD.com, Goodreads, B&N or anywhere else, gets a point for every review posted. It only has to be a line or two saying you liked the book if you can honestly say that, then even just one review posted enters you into a drawing for a signed copy of Steven's story, A Trust Restored when it comes out next year.

The persons who come in first and second in posting the most reviews will get a character named after them in Steven's story and the top winner will also get a $50 gift card. So if that sounds like something you'd be interested in, just sign up for my newsletter on my website and post a review or more, then let me know by forwarding me the links. BUT ... if posting reviews is NOT your thing, PLEASE do not worry about it, okay? This is only for those people so inclined.

Jessica Nelson said…
Melanie, I remember seeing you!! But I didn't know how I knew you, just that you looked familiar, and yep, things were crazy and I was sick, so I don't remember stopping to say hi. Sorry I missed you. :-(

Rita Gerlach said…
I haven't read this one yet, but will. Julie is a talented author with a lot of heart. I've read her other books and can tell you she is not the kind of writer to just throw words onto a page. She is the kind of writer whose words are a part of her.
October 15, 2011 at 10:54 AM